This painting is difficult to find words for…i will try. ( I notice the re appearance of tears, and of the orb….and idealistic intentions. Much has changed in my own perceptions about it all…since creating these paintings .) ( click image to enlarge ) 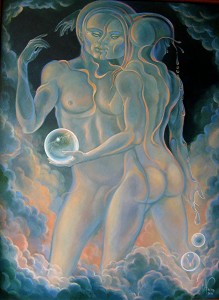 The setting seems a rather ethereal  dimension… a  play of lights forming the “vision” of the figures… clouds, veils…energy in movement…morphing,  transforming.

This image is about attempting intimate joining with another. There is an overlap as these figures appear to share the same physical form in parts as they blend into each other.  Faces, breasts, shoulders, legs and arms are interchangeable, becoming each other. From a strong shared shoulder, her arm is also his arm…and so they hold a crystal ball, within which there is an image of a shared dream…an intention at union and true love.  Two hands, index fingers touching, and a magical light shines in their connecting. Above on the left, the two hands are reaching towards each other as an effort at this connecting, but not yet achieving it. The faces become each other…as they are indeed mirrors. Projected images inter mix with perceptions of true seeing….which can cause them to get lost as to whose image is who’s. On the right, there is an image of pain, fear and separation… tears fall down the arm,  transforming…as the drops become more globes, this time containing a winged image of freedom from the illusion and the lies created by erroneous perceptions and resulting delusions. 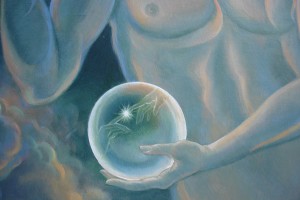 All of this represents to me the range of energies shared by two beings in their attempt at true union…and all that unexpectedly comes up to the surface in that process…some which is devastating, as it must be. A powerful potential is present. They may well go separate ways when the potential of their journey together is completed…or continue together, as indicated. There is also the possibility that they will become lost in unending projections, and split up, each blaming the other….only to move onto another mirror, and repeat.

If they are  deeply committed to living for Truth, there is a chance that they can achieve something Real…True. Likely that will not look anything like what the previously sleeping dreamers projected in the beginning …which must, its self, experience a fundamental dis-integration.

We are not the experiences we have, or any of the roles we have identified with, even the ones we feel most define us.  We are the pure conscious space within which any experience takes place…that which does not change.